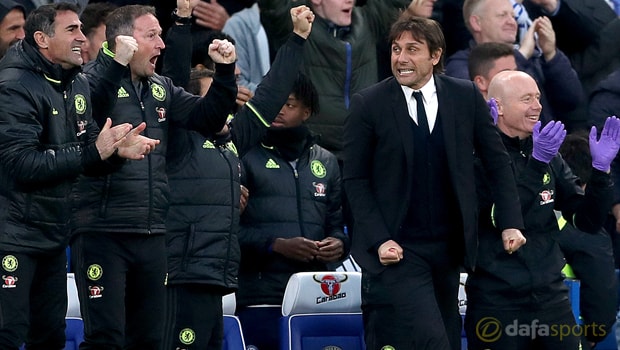 Chelsea boss Antonio Conte has been delighted with the way his side have performed in what he believes has been a transitional season.

The Italian only took over the reins at Stamford Bridge last summer, but he has guided the club to the cusp of the Premier League title, while they are also through to the FA Cup final.

The 47-year-old believes winning at least one of those trophies would be a fantastic achievement for the west London club, particularly as he has always regarded this season as a rebuilding campaign.

“I think we are building, we are starting to build in this season, and if we are able to win, it is a great achievement for us because when you start to build it is very difficult to win during that season,” Conte told the club’s official website.

“This is a process and I think no one thought this season that Chelsea could fight to win the title and could fight to be in the final of the FA Cup because, for sure, at the moment we are in transition.”

Conte is determined to continue his rebuilding project next season, but he is convinced he will have to delve into the transfer market if the Blues are to compete both domestically and in Europe.

He added: “In the next season, for us, it will be the same, but we want to work, and then we have the possibility to go in the market to choose the right players for my idea of football. For sure, we will need more players next season.”

Chelsea can move a step closer to league glory with a victory against relegation-threatened Middlesbrough at Stamford Bridge on Monday and they are priced at 1.17 to win the match, while Boro are available at 19.00 and the draw is on offer at 8.00.