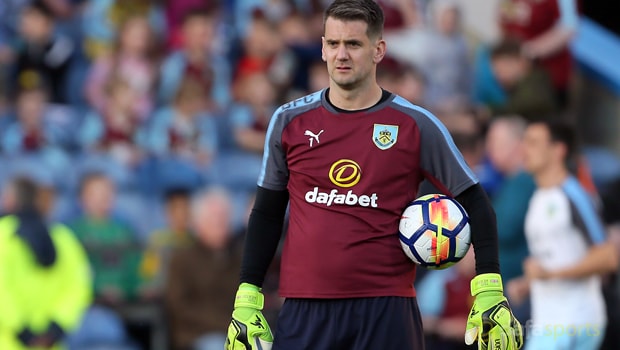 The Clarets have enjoyed a fantastic Premier League season as they currently sit seventh and they are just two points behind sixth-placed Arsenal following a five-match winning run.

Sean Dyche’s side can leapfrog the Gunners in the standings if they beat Chelsea at Turf Moor on Thursday night although even if they finish seventh in the final table, they will still qualify for Europe as long as Southampton don’t go on to win the FA Cup.

Burnley have not played European club football for over 50 years but goalkeeper and club captain Heaton, who has missed the majority of the season through injury, believes there is a chance.

“Two points behind Arsenal as we currently stand, obviously we play Chelsea on Thursday, still got Arsenal to play away from home [on May 6], so it’s [Europe] still a realistic possibility,” he said.

“To put ourselves in position at the moment, it’s certainly a realistic possibility to break into that top six and if we do it’s another marker for us and something we’re chasing.”

Burnley will fancy their chances of beating Chelsea as they were 3-2 victors when the two sides met at Stamford Bridge earlier in the season.

Heaton believes there is no limit to what the Clarets can achieve over the coming seasons. “We tend not to try to limit ourselves,” Heaton added.

“If you set certain markers and if you’re not careful and you hit that ceiling, then it can be a ceiling, so we try not to do that.”

Dyche’s side are priced at 4.20 to secure all three points against Chelsea, who are available at 1.95, while the draw is on offer at 3.50.