Sean Dyche: Work to be done 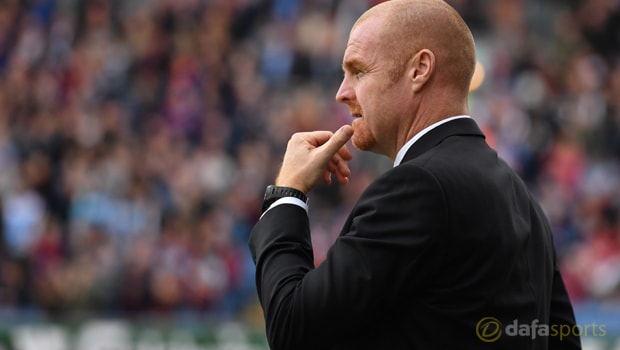 Burnley manager Sean Dyche says he is pleased with the good start to the Premier League season but insists there is still lots to be done to ensure his side stay up.

Burnley have managed to amass nine points from their opening six matches, enough to put the club in ninth position, and they have tasted defeat just once in the league so far.

The upturn in away results will be most pleasing to Clarets’ fans, having been so poor on the road in the previous campaign, with victory at Chelsea on the opening day followed by draws at Tottenham and Liverpool.

Defeat in the League Cup to Leeds United has been the only major blemish this term but there is a real sense of positivity around the club right now.

Next up for Burnley is a trip to Goodison Park on Sunday and Michael Keane, who left Turf Moor to join Everton this summer, could be in line to feature against his former employers.

Dyche has been happy with how things have gone so far this season but he insists there is still a long way to go and warned results can sharply go in the other direction is focus drops.

“It’s been a solid start at least, particularly the teams we’ve played, the three away games were three of the top four last season – the thing I’m well aware of is it’s still early season,” he said.

“You’d take the points we’ve got, but it’s still early season. We know there’s a lot of work to be done going forwards.”

Burnley are 5.25 outsiders to pick up all three points on Merseyside, a draw is priced at 3.80 while the hosts, who picked up a 2-1 win against Bournemouth last time out, are 1.70 favourites.