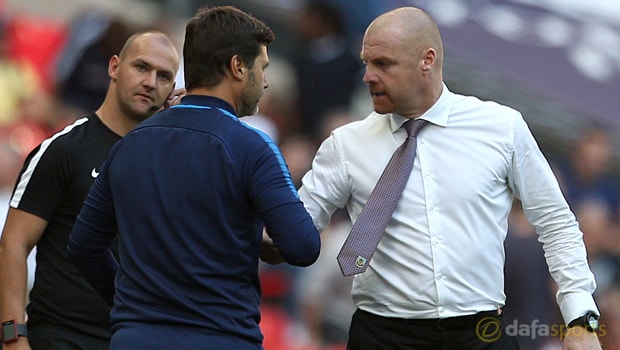 Burnley manager Sean Dyche was full of praise for his troops after they rescued a point against Tottenham in the Premier League on Sunday.

The Clarets travelled to Spurs’ temporary home of Wembley and were under pressure for large spells in the game.

Spurs took the lead in the second half when Dele Alli scored from a corner while Burnley goalkeeper Tom Heaton was on hand to make several key saves.

However, Dyche introduced Chris Wood and Ashley Barnes off the bench and the former was on target in stoppage time.

Wood, who signed from Leeds United for £15million last week, latched on to a through ball and fired home, and afterwards Dyche was quick to praise his team.

He told reporters at full-time: “It is a very difficult task, coming to Tottenham. They are a fine side.

I know there is something made of the stadium but all that stuff, there is still a fine group of players there.

“We knew at times we would have to be patient and stick to our tactical plan. That worked somewhat and then they got a goal from a really scruffy situation.

I thought we rose after that and from then we were absolutely terrific.

“I think we are continuing to grow. We are adding layers to the team and getting slightly stronger.

There still needs to be slightly more belief in some players, and that comes with playing in the Premier League. We are moving forwards.”

Burnley are next in action against Crystal Palace on Sunday, September 10 and they are priced at 2.40 to win. The draw is available at 3.20 while Palace are 3.10 to grab all three points.