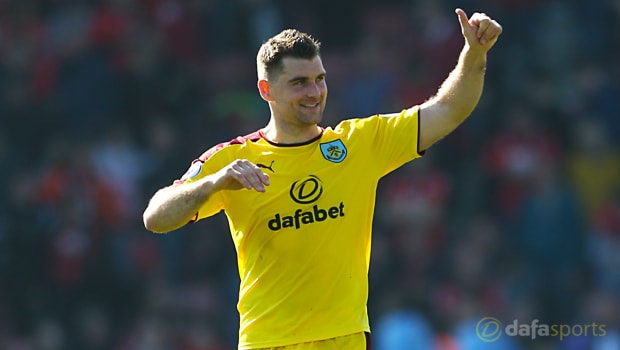 The Welshman nodded home his 10th Premier League goal of the season in Saturday’s 2-1 defeat at Bournemouth and now seems to be fully acclimatised to Premier League football.

Vokes struggled as he battled his way back from a serious knee injury the last time the Clarets were in the top flight.

However, despite a recent hamstring issue, he has proved a real handful for defenders this time around due to his physical style.

The 27-year-old’s ability in the air makes him appear somewhat of a throwback but he is a key cog in Sean Dyche’s approach and will expect that to continue following the boss’ admission that he will not be spending big in the summer.

Despite only picking up a single win on the road, Burnley have enjoyed a fairly comfortable return to the top flight and round off their campaign on Sunday against West Ham.

Winger Gudmundsson admits he has been impressed by his colleague’s recent displays and believes that on current form, he is a handful for anyone.

“He was tremendous [at Bournemouth], I think he probably won 99.9 per cent of his duels and he stuck one in, it was a great header,” the Icelander said.

“He’s been great since he came back from his hamstring. No defender in the league wants to come across Vokesy at the moment.”

Meanwhile, in the Premier League on Monday, champions Chelsea take on Watford in a game they are 1.25 to win, with the draw 6.00 and the Hornets the 11.00 outsiders.