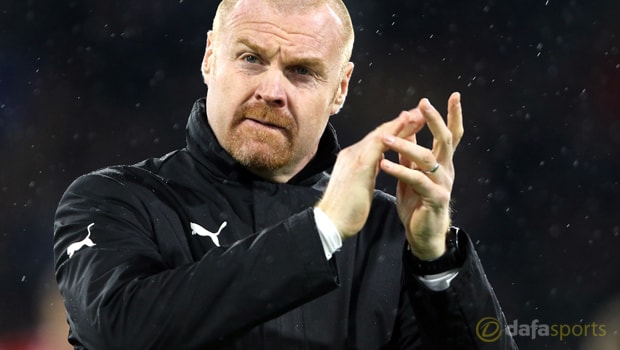 Sean Dyche insists Burnley cannot afford to rest on their laurels after they moved up to fourth in the Premier League standings with a 1-0 victory over Stoke on Tuesday.

The Clarets have leapfrogged Tottenham, Arsenal and Liverpool in the table after Ashley Barnes’ 90th minute winner against the Potters sealed their ninth victory of the top-flight campaign.

Burnley were considered by many people to be relegation candidates at the start of the season and Dyche is understandably delighted with his sides’ start to the campaign, although he acknowledges they cannot take anything for granted just yet.

“I’ve said many times recently, of course it feels good [to be doing well], it feels good for the town and the supporters, but for us it’s business that we have to get on with in the next game – they are coming around quickly this week,” he told Sky Sports.

The former Watford boss also knows his side must continue to progress and he is hoping for another positive result when they travel to The Amex to take on Brighton this weekend.

“We stay focused on the task and the next game is the most important one but I’m very pleased with tonight.

When you’re not playing as well as you can, and the other team are, it’s important to find a way to get a result and that’s what we’ve done tonight.

“The challenge is to keep progressing and we are doing that. I’m convinced of that already in this midway point of the season, which is the key for me over a season.”

Burnley have never finished higher than 16th in the Premier League standings, but they are priced at 51.00 to end the season in the top-four and, by doing so, claim a place in next season’s Champions League.