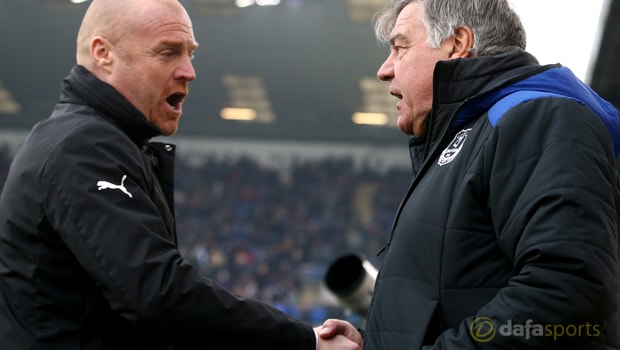 Burnley manager Sean Dyche says he is proud of his side after they reached the magical 40-point mark but has urged the team to keep pushing on until the end of the season.

The Clarets made club history on Saturday as they came from behind to win a Premier League match for the first time, beating Everton 2-1 at Turf Moor and ending an 11-game winless run in England’s top-flight.

Cenk Tosun had put the Toffees ahead in the 20th minute but strikes from Ashley Barnes and Chris Wood after the break secured all three points for the hosts, who have now moved onto 40 points.

Burnley now have nine matches remaining and there is still an outside chance of catching sixth-placed Arsenal, who are in something of a slump at the moment after losing in the League Cup final and seemingly dropping out of the top-four race.

Dyche’s men travel to West Ham, who were thrashed 4-1 by Swansea City last time out, next on Saturday and the visitors will be confident of inflicting more misery on the Hammers.

David Moyes’ side, who are embroiled in a huge relegation battle, are 2.30 favourites to pick up the win, a draw is priced at 3.25 whilst the Clarets are 3.30 outsiders to triumph.

Burnley could be forgiven for taking their foot off the gas after reaching the famous 40-point mark but Dyche wants his side to keep striving for more points.

“Now we’re on 40 points, it took us the whole of last season to get that and now we’ve got nine to go.

I think it’s a real marker of how far we’ve come in a relatively short space of time,” he told Sky Sports.

“We’re constantly looking for ways to move the club and the team forward season-on-season and there are good signs of that.

We want to go again of course and go beyond 40 but it is a fine mark for a club like us at this stage of the season.”