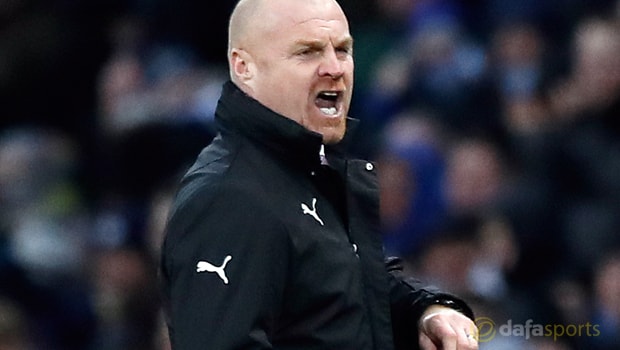 Burnley boss Sean Dyche was left frustrated as his side were knocked out of the FA Cup after suffering a third-round defeat at the hands of Manchester City on Saturday.

The Clarets were the underdogs heading into the match at the Etihad Stadium, but they took the lead during the first half of the contest thanks to a fine strike from Ashley Barnes.

Burnley were only able to maintain their advantage until Sergio Aguero drew City level 11 minutes into the second half and from then on Pep Guardiola’s side dominated the contest.

Dyche was not happy with the manner of the Citizens opening goal, however, as he believes referee, Graham Scott, should not have allowed the hosts to take a quick free kick in the lead up to the goal.

“I heavily question a moment that changed the course of the game,” Dyche said.

“We had done a good job up until then, not only by scoring a fine goal, but working from our shape and frustrating the opposition.

“We know they have to start to open up and that can leave them open to the counter, but then it gets to a moment where, I imagine, the rules are probably in the referee’s favour.

I don’t think he has to whistle, but at times you have to use common sense and that was such a moment.”

Aguero added a second goal for City just two minutes after he struck his first, before goals from Leroy Sane and Bernardo Silva sealed a 4-1 victory for the Citizens.

Burnley have now failed to win any of their last six games and they will be looking to return to winning ways when they travel to Selhurst Park to take on Crystal Palace in the Premier League on Saturday.

The Clarets are priced at 4.00 to emerge from that contest with all three points, while Palace are available at 2.05 and the draw is on offer at 3.30.