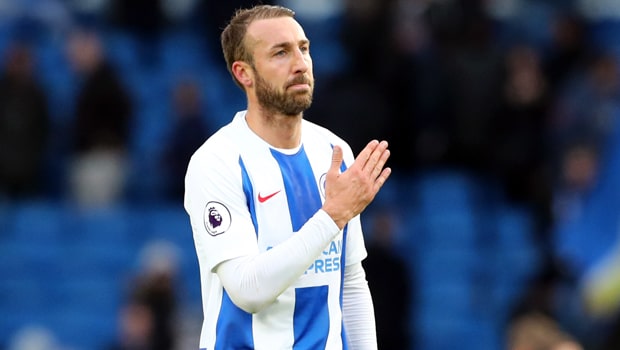 Glenn Murray says his one-year contract extension with Brighton is further proof that sheer determination can carry a footballer a long way.

The 35-year-old has agreed a one-year contract extension to keep him with the Seagulls until the summer of 2020.

Murray has netted six times in the Premier League this season and reached 100 goals for the club last month, while also becoming the club’s record goalscorer in the post-war period.

The latest show of support means plenty to the much-travelled forward and he admits it did not always looks like he would be signing contract extensions in the Premier League in the twilight of his career.

“It means a lot that the club has shown another year’s faith in me. I just want to carry on in the form I’m in at the minute and continue scoring goals at this level for Brighton,” said Murray.

“I don’t think at any stage of my career I’d have believed I would be getting another contract in the Premier League at this age, but you just never know what can happen in football.”

Brighton have made another competent start under Chris Hughton and sit 12th in the standings after a dozen games. Signing a new deal affords Murray the ‘security’ he hoped for and he says he will now focus on helping the club retain their top-flight status for the second time.

“It wasn’t something I was losing sleep over, I was fully focused on the season as a whole and trying to keep Brighton in the Premier League,” he added.

“But it’s nice to put the next year to bed and know that I’ll be here at the club, hopefully playing in the Premier League again [next season].”

Brighton are 3.00 to win their next game at home to Leicester on November 24.