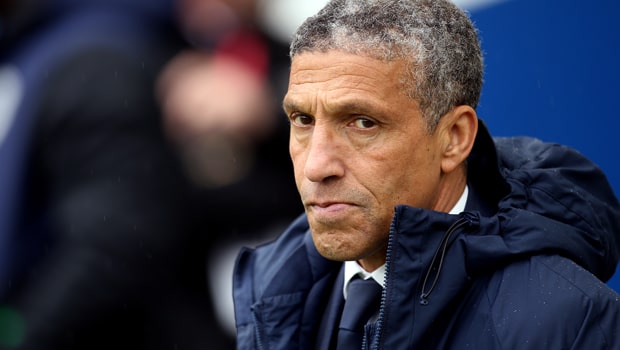 Chris Hughton says Brighton have no choice but to move on quickly after they crashed to a 5-0 defeat at the hands of Bournemouth on Saturday, their heaviest loss at the Amex Stadium.

English midfielder Dan Gosling and Scotland international Ryan Fraser netted either side of the interval before the Seagulls were reduced to 10 men after a reckless challenge from Anthony Knockaert in the 68th minute.

BBC pundit Dion Dublin, who was capped four times for the Three Lions, described the Brighton midfielder’s tackle on Adam Smith as “disgusting” and claimed it “could have been a career-ending tackle”.

David Brooks, Callum Wilson and Junior Stanislas added to Brighton’s misery as they all got in on the goal-scoring act, with Bournemouth’s victory taking them past the magical 40-point mark.

As for the Seagulls, they remain five points clear of the drop zone and face a relegation six-pointer on Tuesday night at home to Cardiff, who could move to within two points of Hughton’s men with a win.

Speaking after the dismal loss to the Cherries, Hughton admits his side need to forget about the defeat and concentrate fully on the midweek encounter against the Bluebirds.

“We have no choice, we have a game on Tuesday and everyone will be looking for a reaction,” he said.

“There’s not one player in that changing room who hasn’t been through a bad defeat, an embarrassing defeat, a humiliating defeat, whatever you want to call it, and had to go again.

“That’s the nature of the game. It’s our worst overall performance and we have no choice but to be better.”

Brighton are 11.00 to be relegated while Cardiff are 1.05 favourites to take the third and final spot in the bottom three.