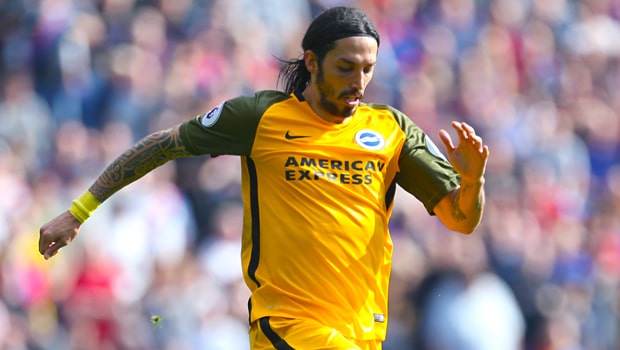 Brighton manager Graham Potter says Ezequiel Schelotto will be afforded the opportunity to prove his worth after enduring a tough time at the Amex Stadium.

The full-back joined Brighton, who are priced at 2.88 to be relegated in 2019-20, on a three-year deal from Sporting Lisbon in August 2017 but struggled to adapt to life on English soil.

He made 20 Premier League appearances during his debut campaign, starting on 15 occasions, and last appeared for Brighton in the 4-0 hammering against Liverpool on the final day of 2017-18.

Schelotto fell down the pecking order with Chris Hughton last season and was subsequently loaned out to Chievo in January. However, he sustained a cruciate knee ligament injury just four games into the loan stint and is still working his way back to full fitness.

Potter insists he will give the Buenos Aires-born defender every opportunity to fight for his place when he is ready to return to training.

“I don’t think it’s fair to come in with a pre-conceived idea and judgement on anybody,” Potter said.

“That is one of the benefits of somebody coming in with a new set of eyes. “Of course there are players that have been playing and have done well for the football club and carry that respect, but at the same time I think everybody should be aware that there is an opportunity.

“We want to try to maximise the group and understand as much as we can about them.” Potter’s comments will also provide hope for the other fringe players like Markus Suttner, who spent the second half of last term with Fortuna Dusseldorf, and Tomer Hemed.