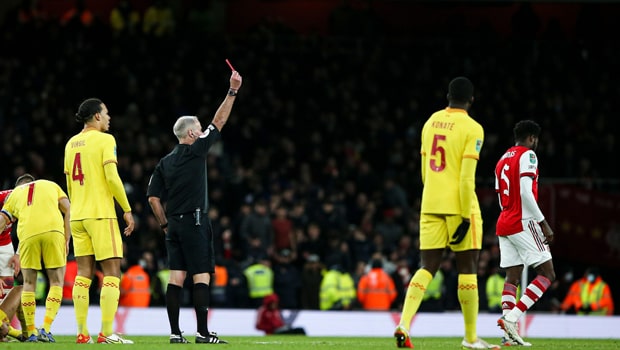 Liverpool will face Chelsea in the final of the Carabao Cup after beating Arsenal 2-0 in the second leg played on Thursday night at the Emirates Stadium. Liverpool and Arsenal had initially played a 0-0 draw in the first leg last week, but the return leg which was played on Thursday saw Jurgen Klopp’s side dominate the game as they blazed over the Gunners with a 2-0 scoreline to book a date with Chelsea who beat Tottenham Hotspur to the final ticket.

Arsenal started the game with like a house on fire as Alex Lacazette hit the crossbar with a free-kick early in the game. Gabriel Martinelli also had chances to put the Gunners ahead.

However, it was Liverpool who scored first after Diego Jota raced through the Arsenal midfield before coolly finishing past Aaron Ramsdale from the edge of the box.

In the second half, Ghana midfielder Thomas Partey was introduced into the game despite only returning to London earlier in the day after Ghana’s early exit from the Africa Cup of Nations with a 3-2 loss to Comoros on Tuesday.

The Ghanaian midfielder’s introduction in the 75th minute was ineffective as he was sent off late in the game, 12 minutes after Diogo Jota scored a second for Liverpool in the 77th, beating an offside trap to lob over Aaron Ramsdale.

Meanwhile, Liverpool manager Jurgen Klopp had nothing but praise for Diego Jota after the game.

“Difficult game, difficult time, but the boys were exceptional. We scored two wonderful goals, Diogo Jota on fire. We were completely convinced when he arrived at the club he would help us massively. Since he is here, he has made another step; he has turned into a really world-class striker.” Klopp said.

The final of the EFL Cup will be played at the Wembley stadium on the 27th of February.