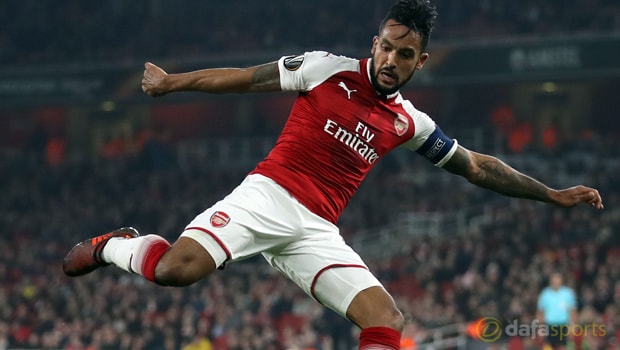 Theo Walcott says he is doing everything possible to impress manager Arsene Wenger in order to earn a place back in Arsenal’s starting XI for the Premier League.

England international Walcott is yet to start a league game for the Gunners this season, amassing just 27 minutes of Premier League action, and he has had to settle for opportunities in the cup competitions.

The 28-year-old has predominantly been used in the Europa League and he made his fifth start of the campaign in Thursday night’s 6-0 thumping of BATE Borisov at the Emirates.

Wenger handed the armband to the former Southampton youth star and that proved to be a good decision as the forward found the back of the net for the third time in the tournament.

Midfielder Jack Wilshere, who is also yet to start a league game, also impressed during the match and his crisp strike before half-time added to his fantastic display.

Both players are now pushing for a place in the starting 11 for Sunday’s clash against Southampton with Walcott hoping he has done enough to retain his place.

“There is plenty of competition when you play for Arsenal,” he said.

“We are doing our best to give the manager a headache to pick us for the team.”

Arsenal are 2.00 favourites to pick up all three points at St Mary’s, a draw is priced at 3.60 whilst the Saints are marginal 3.80 outsiders to record a fifth win of the campaign.

Wenger is expected to recall a number of his rested players for the clash with Chile’s Alexis Sanchez, Germany’s Mesut Ozil and France’s Alexandre Lacazette all in the running.