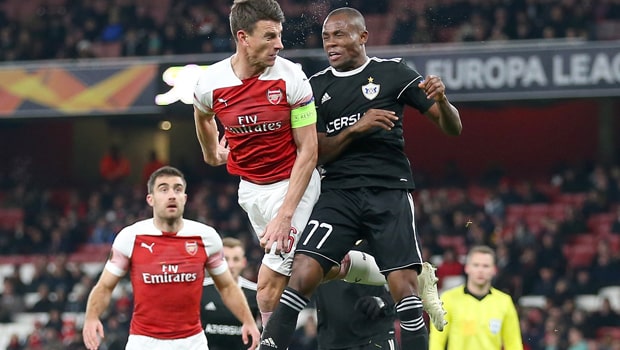 Arsenal captain Laurent Koscielny is eager to get his season up and running after making his first Gunners appearance under boss Unai Emery.

The central defender played 72 minutes at the Emirates in Thursday’s Europa League win over Qarabag, with the north Londoners already safely into the last 32.

It was his first outing since rupturing his Achilles in the semi-final of the same competition against Atletico Madrid back in May.

Emery says he will have to make a late call on Koscielny’s fitness for the Premier League trip to Southampton on Sunday, but the experienced Frenchman is just pleased to be back in the fold.

“It was an important day for me,” he told Arsenal.com. “It was the end of my rehab, so I am very happy to play today with my team, for this club, and to enjoy it with them on the pitch.

“It was very emotional because you remember the first day when I was injured, the 3rd of May, and now we are on the [13th] of December, and you have some flashbacks in your head about different periods you had during your rehab.”

The 33-year-old admits there were dark times during his spell on the sidelines as he praised those behind the scenes at Arsenal for putting him on the right track.

“You know in rehab it’s difficult to be injured, because when you start rehab you have to re-learn how to walk, how to go step by step on the stairs, and it’s difficult at the beginning because you look like you can’t be back on the pitch,” he added.

“But with the people who worked with me and helped me every day, I gave 100 per cent to be back every day and to progress every day. Then when I came back here [to Arsenal] everyone pushed me hard to work.

It’s OK – I like to work! So I gave more for this and now I have the result for all the effort I made over seven months.”

Arsenal are 7.00 to win the Europa League this season, Chelsea are favourites at 5.00, while Champions League dropouts Napoli are 5.25.