Perfection the target for Gunners 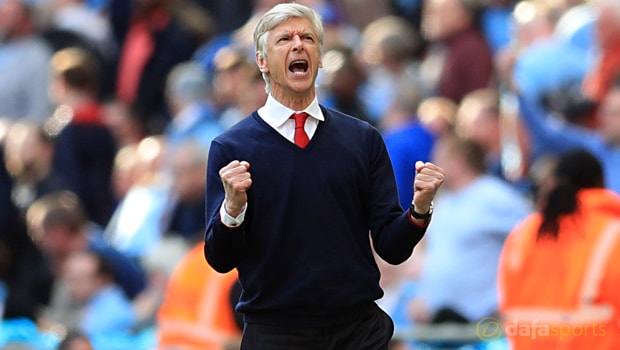 Arsenal boss Arsene Wenger says his side need to win all of their remaining games to clinch a top-four spot – starting with the visit of Leicester on Wednesday.

The Gunners sit seventh in the Premier League table, seven points adrift of fourth-placed Manchester City – albeit with a game in hand.

Liverpool in third are perhaps a more realistic target for Arsenal as they have a nine-point advantage having played three games more, but whatever the permutations Wenger thinks his side need to take maximum points to qualify for next season’s Champions League.

Arsenal are 6.50 to secure a top-four finish and Liverpool are 1.50. Arsenal claimed a place in the FA Cup final with a victory over City on Sunday and Wenger hopes they can use that win as a springboard for success in the Premier League.

“The top four is open – but what it demands from us is consistency in the results now until the end of the season,” he said.

“It’s still possible, but that means we’ll maybe have to have a perfect run-in.

“It looks like we will have to win all our games. That has to be the target. To achieve that, we have to win the next one.

“I think the next thing we have to achieve is to transfer the energy level we showed on Sunday to the Premier League.

We started well at Middlesbrough [a 2-1 win last Monday], so let’s continue that against Leicester.

“The semi-final will give us a bit more confidence. I think it will convince everybody that with the right energy levels and the right fighting spirit, the right togetherness, we can beat everybody.”

He added: “Look, it [the semi final] will give us a lift for sure. But then we have to show we can keep that level of energy and that level of desire, of hunger in every single game until the end of the season.”