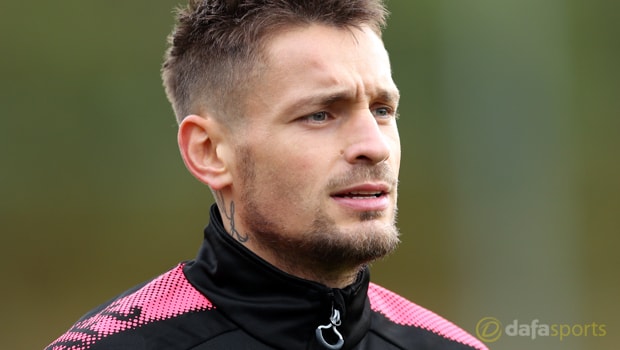 Arsene Wenger believes Mathieu Debuchy’s return to fitness could help give Arsenal some of the defensive steel they have missed in recent times.

The 32-year-old joined the Gunners from Newcastle in 2014 and excelled in his early months as a right-back, only to be cut down by a series of injuries that have limited him to just 25 appearances across all competitions.

However, he made his first outing in almost a year in last month’s 1-0 win over Red Star Belgrade and backed it up by completing all 120 minutes of the League Cup triumph against Norwich.

Debuchy is again expected to start on Thursday in the return game with Red Star and, having made his name as a buccaneering right-back, Wenger believes a more central role is now where he can get the best from his fellow Frenchman.

The coach has favoured a back three in recent months and feels the former Lille man has the attributes to make a huge difference to his rearguard.

“We are all very pleased for him here because he has gone through some very difficult moments with setbacks,” Wenger is quoted as saying in the Evening Standard.

”The fact that he got through 120 minutes the other night is a huge boost for him. He needs to recover now but from now on he’ll be a candidate to fight for the team places again.

“Maybe his future is as a centre-back. He has the attributes because he’s very good in the air.

You think he couldn’t play centre-back because he’s not tall, but if you look at the number of balls he wins in the air, it’s impressive.”

Although Wenger is again likely to make changes, Arsenal are still the clear 1.33 favourites to win on Thursday, with the draw 5.25 and their Serb opponents are 8.00.