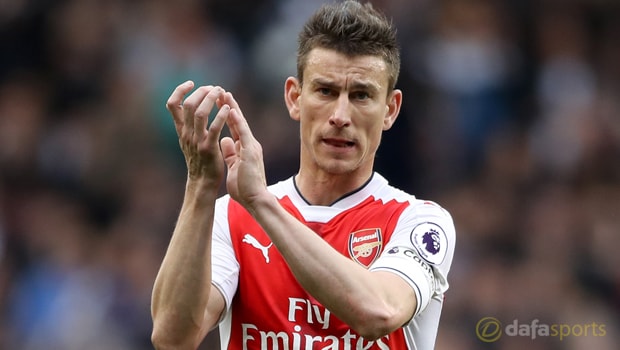 Laurent Koscielny insists he has no plans to leave Arsenal despite reported interest from Marseille.

The France international is one of the longest-serving players at the Emirates Stadium having joined the club from Lorient in the summer of 2010 and he recently put pen to paper on a new long-term contract.

Despite signing that new deal, the 31-year-old has been heavily linked with a move to Marseille this summer, but he has now dismissed that speculation, insisting he has no desire to leave Arsenal.

“When I first got here, I didn’t think about how long I would stay at this club – but now I am starting my eighth season so I am very happy with this,” he told the club’s website.

“I have a long contract with Arsenal and I have [no reason] to leave the club.

I am just here to enjoy my job and give everything for the team, and get the best results for the club.

If I can do all of that, then I am happy.” Koscielny is also keen to continue working with Gunners boss Arsene Wenger, who penned his own new two-year contract with the club earlier this summer.

“I have a big [loyalty] to this club and to the boss [Wenger] too,” he added.

“I have stayed here for seven years and I have learnt a lot from him, so I am happy to be here with him and to fight for him because he is a great person.”

Arsenal failed to secure a top-four finish in the Premier League for the first time in 21 years last season, but they are priced at 2.00 to return to the Champions League places in the next campaign, while they are available at 13.00 to win the title.