Jack Wilshere ‘back in days’ after latest setback 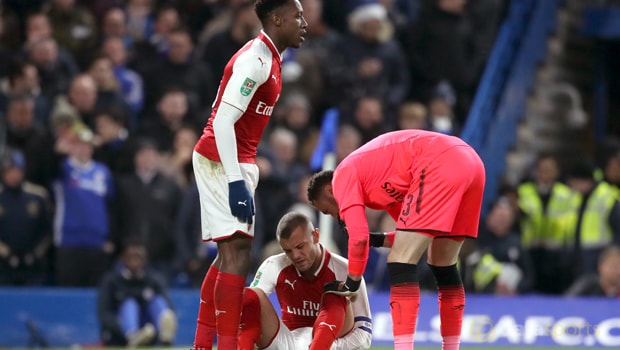 Arsene Wenger has been boosted by the news that midfielder Jack Wilshere’s latest injury problem is not a serious one.

Wilshere was forced off early in the Gunners’ scoreless draw at Chelsea on Wednesday evening in the Carabao Cup semi-final first leg.

He appeared to twist his ankle when stretching to block an attempted pass from Danny Drinkwater and was withdrawn just before the hour mark.

Afterwards Wenger conceded that his player would be struggling for Sunday’s Premier League encounter with Bournemouth.

“For Sunday I think he will be short, but I do not know how long he will be out,” said Wenger.

The 26-year-old’s career has been plagued by injury woes.

Wilshere spent last season on loan at Eddie Howe’s Cherries in a bid to get sustained first-team football in the Premier League. He was again ruled out in August having returned to Arsenal.

Back to full fitness, he has recently been delivering some fine performances at the heart of Wenger’s midfield, boosting hopes he can be part of Gareth Southgate’s England panel for the World Cup in Russia this summer.

The last thing Wilshere needs is another absence and the player took to social media to reveal he doesn’t expect to be sidelined for very long.

“Thanks for all the messages and support after last night. Good news is I should be back in a couple of days,” he tweeted.

Wilshere was skippering Arsenal against Chelsea and was making his seventh start in nine games for the Gunners.