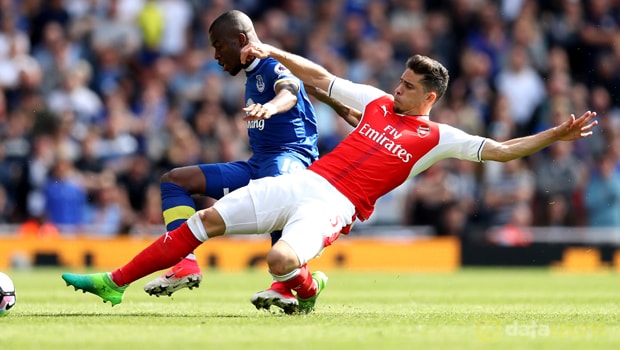 Arsenal face a defensive crisis ahead of Saturday’s FA Cup final against Chelsea after Gabriel Paulista was ruled out for up to eight weeks with a medial knee ligament injury.

The Brazilian sustained the injury during the Gunners’ 3-1 triumph over Everton in the Premier League on Sunday, a result that was not enough to see Arsene Wenger’s men secure Champions League football for next season.

The match at the Emirates also saw Arsenal lose Laurent Koscielny to suspension as he was sent off for a late challenge on Toffees forward Enner Valencia while fellow centre-back Shkodran Mustafi could also miss the FA Cup final due to illness.

Arsenal will head into Saturday’s game with Per Mertesacker, who has only appeared once this season, and youngster Rob Holding as their only available central defenders. Wenger admits his side are struggling for options at the heart of their defence.

“Gabriel is out for six to eight weeks,” the French boss said. “We had a scare about his cruciate, but it is only medial knee ligaments so positive is that he avoids surgery.

But, of course, he is out now until the beginning of August. “Shkodran Mustafi we have some worries because he is still sick at the moment. He has not trained yet.”

Wenger concedes he may have to revert to a back four for the cup final despite having seen an upturn in form since utilising a three-man defence.

He added: “I have to decide on Saturday [whether to change to back four] and we’ll test that in training until then.”

Arsenal have won the FA Cup in two of the last three seasons and they are priced at 2.88 to claim overall glory once again on Saturday.

Premier League champions Chelsea are available at 1.40 as they look to secure the double.