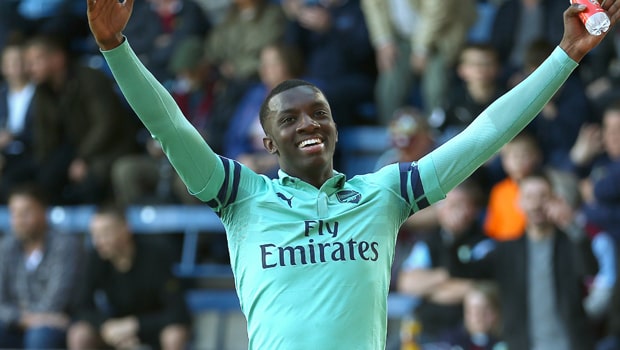 Eddie Nketiah says his “ideal scenario” is to be playing regular football for Arsenal next season and he is happy to fight for his place in the first team.

England Under-21 international Nketiah is highly-regarded at Arsenal, having joined the club’s youth set-up in 2015, but he struggled to make his mark in the first team last season. Under new boss Unai Emery, the 20-year-old forward started just three games for the Gunners during the 2018/19 campaign and made eight substitute appearances in the Premier League.

Player of the season Alexandre Lacazette and Premier League Golden Boot winner Pierre-Emerick Aubameyang, who shared the award with Liverpool duo Sadio Mane and Mohamed Salah, are currently ahead of him in the pecking order at the Emirates Stadium.

There have been suggestions Nketiah could spend next season out on loan, following in the footsteps of club-mate Reiss Nelson who enjoyed a successful spell at Hoffenheim last season. However, the London-born star is hopeful of being offered a chance in Emery’s first team and he will be doing everything he can to impress the Spanish tactician.

“My ideal scenario is to be playing here, I want to play here next season but we have got to see how that goes,” he told PA. “I am confident enough in my ability that I am good enough to play here so I have just got to work hard and show the manager that I can.

“My aim is to play for Arsenal, that is my goal and has been my aim since I was a kid. It is great to have two of the best strikers in the world around you and learn from them every day. I’m just progressing, trying to catch them and make the gap smaller and smaller.”

Arsenal kick off their PL season with a trip to Newcastle United on August 11 and the visitors are 2.05 favourites to pick up the win, while a draw and a Magpies victory are both priced at 3.60.