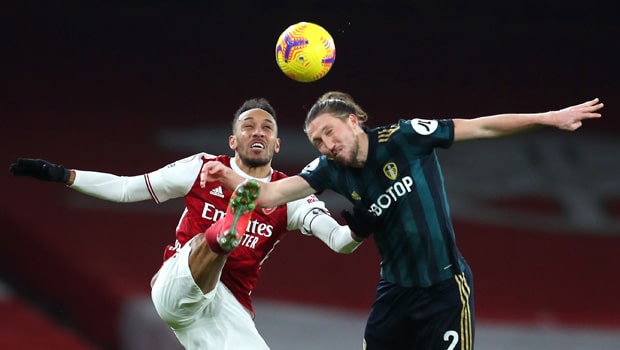 Arsenal’s Gabonese striker Pierre-Emerick Aubameyang scored a Hattrick as Arsenal returned to winning ways with a 4-2 win over Leeds United at the Emirates Stadium on Sunday.

The Gunners were winless in three matches before the visit of Marcelo Bielsa’s side to the Emirates Stadium.

Their last three matches involved back to back losses to Aston Villa and Wolves, including a 0-0 draw against Manchester United.

Arsenal and Aubameyang’s first goal of the game in the 13th minute and he doubled it just 4 minutes before half time from the penalty spot.

Spanish wing-back Hector Bellerin made it 3-0 on the stroke of halftime. The goals kept pouring in the second half with Aubameyang completing his hat-trick in the 47th minute.

Leeds United got goals of their own after that as Dutch Defender Pascal Struijk scored in the 58th minute and Helfer Costa made it 4-2 ten minutes later.

Neither side failed to score in the last twenty minutes of the game but the scoreline was already big enough to hand Arsenal a win.

Arsenal remained in tenth and Leeds United eleventh with 34 and 32 points respectively on the Premier League table.

Meanwhile, Manchester United failed to win at the Hawthorns as they drew 1-1 with West Brom to put the points gap between themselves and Manchester City at seven points.

The home side had taken the lead in the 2nd minute of the game through Senegalese forward Mbaye Diagne but Bruno Fernandes equalized for the Red Devils just before half time.

However, both sides failed to find the winner as West Brom goalkeeper Sam Johnstone was brilliant in the goal.

Earlier on Sunday, Wolves came from behind to beat Southampton 2-1 at the Saint Mary’s Stadium.

Dany Ings had given the Saints the lead in the first half but Nuno Espirito Santo’s side avoided a second straight defeat to the same side in three days.

Ruben Neves equalized in the 53rd minute of the second half before Pedro Neto scored the winner in the 66th minute.