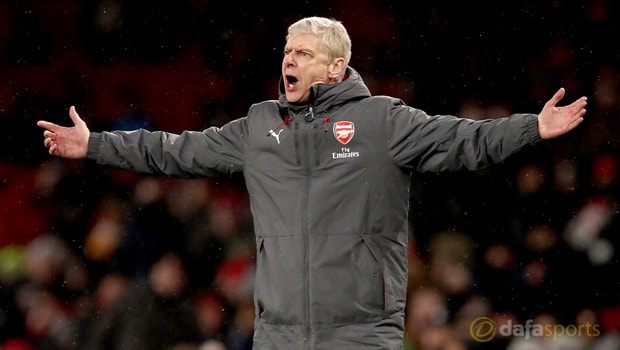 Arsene Wenger is convinced Arsenal can still end their season on a high despite Thursday’s 3-0 Premier League defeat against Manchester City at the Emirates Stadium.

The Gunners went into the match having lost to the same opposition in Sunday’s Carabao Cup final and it was a case of Deja Vu for Wenger’s side, as first-half goals from Bernardo Silva, David Silva and Leroy Sane sealed what was a comfortable night’s work for the Citizens.

The result leaves Arsenal 10 points off the top-four positions and their only realistic chance of salvaging their season appears to be by winning the Europa League, although they have been drawn against in-form AC Milan in the last 16 of that competition.

Confidence also appears to be low within the Arsenal camp, as they have lost four of their last five games in all competitions, but Wenger remains defiant that his side can still end their season on a high.

When asked if the season can still be saved, the Frenchman told Sky Sports: “Yes. We want to focus on the next game and continue to put in the effort we put in tonight.

“We played twice against certainly the best side in the country at the moment and that was of course difficult for us because we didn’t have a good performance in the first game. But we have quality and we want to show that.”

Arsenal’s recent struggles have also increased the speculation regarding Wenger’s future at the Emirates Stadium, but the 68-year-old insists now is the time for everyone to stick together, as he bids to restore the confidence within his squad.

“We must stay together but it’s very difficult,” he added.

The north Londoners are next in action when they visit Brighton in the Premier League on Sunday and they are priced at 1.85 to win that match, while the Seagulls are available at 4.20 and the draw is on offer at 3.75.