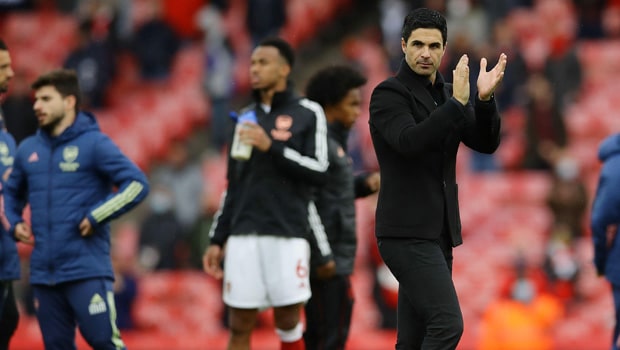 Arsenal for the first time will not be playing in any European competition next season after failing to qualify for Europe despite beating Brighton 2-0 at the Emirates Stadium on the final day of the season.

The Gunners had a slim chance of making the UEFA Europa Conference League if they win and also depending on other results.

The first half ended 0-0 but Mikel Arteta’s side took the lead through Nicolas Pepe who scored five minutes after the break.

The Ivorian added another right on the hour mark to score his second brace in two consecutive matches after scoring a double against Crystal Palace in a 3-1 victory at the Selhurst Park in midweek.

Meanwhile, Tottenham Hotspur came from behind to win 4-2 against Leicester as the Foxes failed to make the Champions League despite Chelsea losing 2-1 to Aston Villa at the Villa Park.

Forward Jamie Vardy scored an early penalty to give Brendan Rodger’s side the lead although Harry Kane equalized to pull Spurs level before the break.

Meanwhile, Jamie Vardy put the Foxes back in the lead in the 52nd minute with another penalty. An own goal from Kasper Schmeichel in the 76th minute pulled Spurs leveled again.

Chelsea on the other hand had a goal disallowed as Aston Villa secured a 2-1 victory, Bertrand Traore and Anwar El-Ghazi scored for the Villa park side while Ben Chilwell scored for Chelsea.

Liverpool won 2-0 against Crystal Palace as they complete the top four alongside Chelsea and both Manchester clubs.