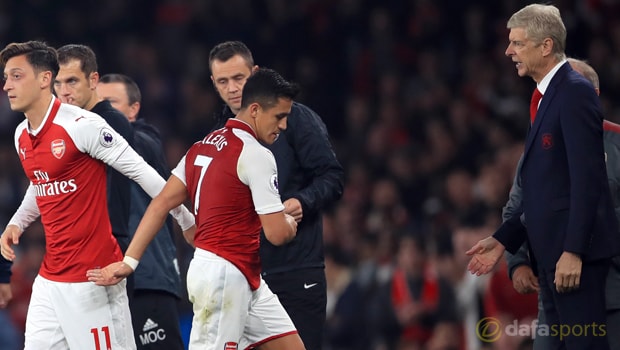 Arsenal manager Arsene Wenger has praised Mesut Ozil and Alexis Sanchez for the roles they played in Sunday’s emphatic 5-2 victory at Everton.

The north London side, who are priced at 2.38 to finish in the top four, have been inconsistent in the early stages of the current campaign, having fallen to their third defeat last time out in the Premier League against Watford.

However, they looked much improved on Sunday as they took advantage of the Toffees, who were reduced to 10 men in the second half, to climb to fifth in the table.

Everton took the lead through Wayne Rooney but Nacho Monreal squared up the scoreline just before the half-time break.

Mesut Ozil put the Gunners ahead with his first goal of the season and Arsenal were handed an advantage when Idrissa Gueye was sent off with 20 minutes left to play.

Alexandre Lacazette, Aaron Ramsey and Alexis Sanchez enhanced Arsenal’s lead, while Oumar Niasse also chipped in for the home side.

Wenger was full of praise for contract rebels Ozil and Sanchez at the full-time whistle and believes they are starting to hit top form.

“I believe that [Sanchez] comes back from injury and has worked very hard, Ozil as well,” Wenger said.

“The two of them were sharp physically, very mobile and if you have their individual quality, that makes them dangerous against any defender. [Sanchez] was on fire.

“[Ozil] was superb. Agile, quick, intelligent. Always at the service of the team with his quality of his passing and when he is at that level, he is an exceptional football player.”