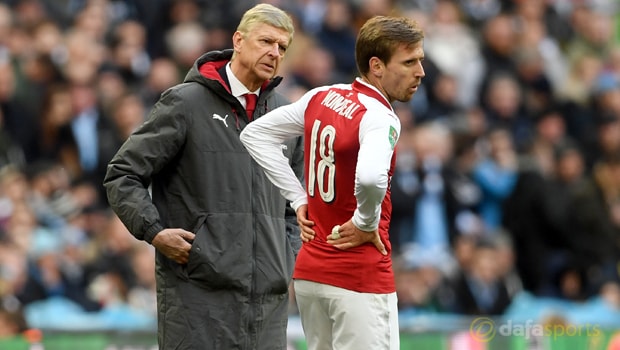 Arsenal coach Arsene Wenger has confirmed that left-back Nacho Monreal will miss the next four matches due to a back injury.

The Spaniard has been in superb form this season for the Gunners, scoring four goals in 23 Premier League appearances.

He has been unable to help the club remain in the top four, though, and Wenger’s men are now 10 points behind fourth-placed Tottenham in the Premier League table.

Monreal did help Arsenal reach the final of the Carabao Cup but he was forced off during the first half as Manchester City ran out 3-0 winners at Wembley.

He will now miss the league meeting with City on Thursday and the clash with Brighton on Sunday.

When asked by reporters, Wenger also confirmed he could miss two further games due to his inflamed back.

He told Sky Sports: “He is out for the two games this weekend – Thursday and Sunday certainly. He might be out for two more games – Milan and maybe one more [Watford].

“He has an inflamed back.” Wenger is under pressure to resign due to his team’s recent form but the Frenchman insists he is not the problem.

He added: “We are in that kind of situation where you want to focus on the next game. I don’t ask if your position is reviewed at the end of the season.

“My job is to perform and it is for other people to evaluate.”

Arsenal are priced at 4.20 to win, with the draw 3.80, while Manchester City are 1.83 favourites to grab all three points.