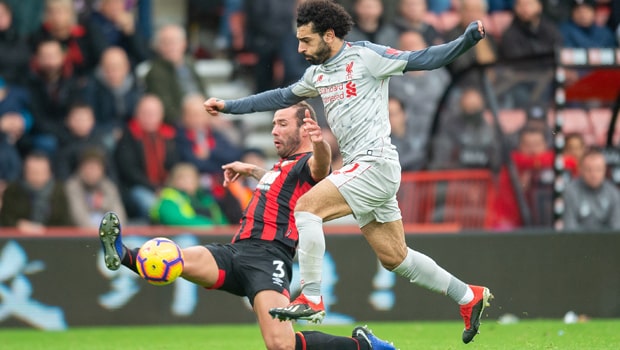 Bournemouth defender Steve Cook has admitted he’s annoyed with himself for letting Liverpool striker Mohamed Salah run riot on Saturday and is looking to put things right against Wolves on Saturday.

The Cherries were second best at the Vitality Stadium as Liverpool came away with a convincing 4-0 win.

Salah was back at his devastating best as he scored a hat-trick, while Cook was run ragged and had an unfortunate hand in the final scoreline as he inadvertently scored an own goal, deflecting Andy Robertson’s cross into his own net in the second half.

The defender has admitted it was a day to forget and is hoping to quickly move on by putting on a much better display at Wolves this weekend.

He told Sky Sports: “I didn’t cope with him (Salah) at all, which is really frustrating because you want to perform well against the best players in the world.

“It was an extremely difficult day for myself. We probably gave him chances that we shouldn’t have but he was there to take them, so fair play to him.”

The clash against Wolves appears difficult on paper as Nuno Espirito Santo’s men are right back in top form after successive wins in the past week over Chelsea and Newcastle, and Cook is under no illusions.

He added: “They look a very good team. They’re very attacking and they’ve come into the Premier League and played the football they did in the Championship.

“They’ve really come in with a lot of confidence and won some good games and responded well to defeats as well. So it’s going to be a really tough day.”