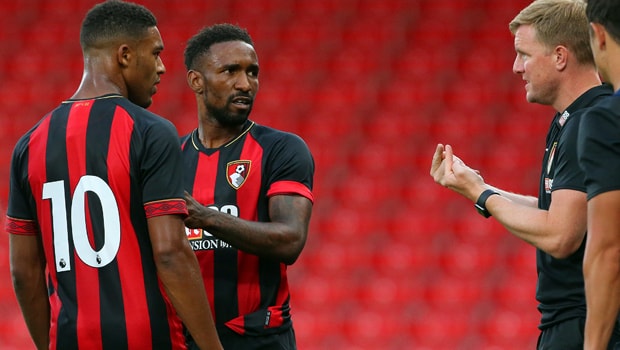 Bournemouth boss Eddie Howe has claimed there is no chance of Jermain Defoe leaving the club before the end of the week.

The former England international has struggled to keep his spot in the first team in recent months but still has two years left on his current deal.

Defoe, who has scored four goals for the Cherries since his switch from Sunderland in 2017, has been linked with a loan move this week.

Reports claimed Nottingham Forest were trying to sign him before Friday’s deadline but Howe has denied those rumours.

The former Tottenham man started Tuesday’s 3-0 win over MK Dons in the Carabao Cup and Howe insists nobody will be leaving the club.

He told reporters: “No, I’m not going to let anyone go, our squad is our squad. We’re not huge on numbers and we also have a couple of injuries at the moment.

“Jermain’s a valued member of our squad, we only carry four strikers so there’s absolutely no chance of him going anywhere.”

Lys Mousset and Marc Pugh are still struggling with injuries but Howe did introduce Jefferson Lerma and Diego Rico into his team for the first time.

Bournemouth take on Chelsea on Saturday and both men could be in contention, according to Howe.

He added: “It’s very difficult to come straight in and go well, but they did. It will do them the world of good to have that experience.”