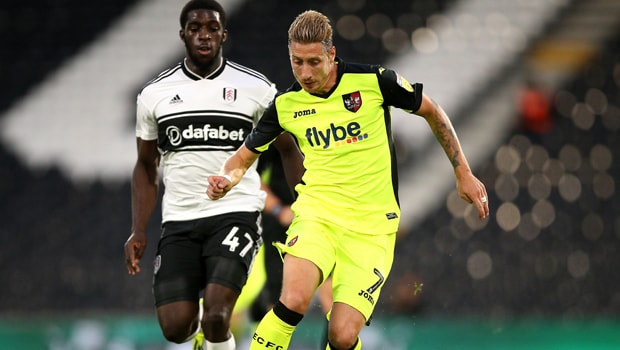 Fulham striker Aboubakar Kamara admits he was pleased with his display during Tuesday night’s 2-0 win over Exeter City in the Carabao Cup.

Cottagers coach Slavisa Jokanovic decided to make 11 changes to his team but the rest of the squad stepped up to the mark at Craven Cottage.

Kamara opened the scoring with a volley after Christy Pym spilled a shot, before latching on to a through ball at the start of the second half.

The forward is hoping to push Aleksandar Mitrovic for a first-team spot and he admits his confidence levels have already increased.

“It’s great for everyone, for me and the whole team. We’re all here to support each other.

“It’s important to take your chance. When a coach decides that you are ready to play, then you have to show that you will repay his faith in making that decision. Also, it’s good for my own confidence to score goals.”

Fulham have now won back-to-back games after successive defeats and Kamara is ready to help the team climb the Premier League table.

He added: “It’s a long season, a very long season. The first two games of course were difficult, but there are so many matches left.

“We have to be solid and now just have that belief that we can carry on this good form.”

Fulham will travel to Brighton on Saturday and the Seagulls are 2.20 to win. The draw is 3.30, while Fulham are 3.40 to grab all three points.