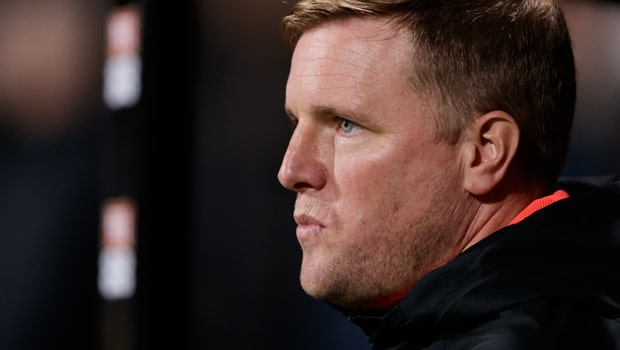 Bournemouth may have ended a run of four Premier League losses with their midweek win over Huddersfield but manager Eddie Howe wants more from his side.

Despite an early two-goal advantage, Howe’s side were clinging on for their 2-1 win over the Terriers.

It was a welcome three points, enough to lift them into seventh place in the table, and while Howe was delighted to win whilst not playing well, he’s keen to see better when they welcome Liverpool to the Vitality Stadium on Saturday.

“The game on Tuesday was a big win for us. We won without playing well, something we’ve rarely done in the Premier League,” said Howe.

The relationship between striker Callum Wilson and winger Ryan Fraser has been the success story of Bournemouth’s season so far, with the pair combining for 12 goals and 15 assists in the club’s tally of 25 league goals so far.

The manager insists it isn’t something he has specifically focused on.

“I wouldn’t say that Ryan Fraser and Callum Wilson’s partnership hasn’t been something we’ve specifically worked on,” Howe admitted.

“I can’t take credit for it, but it’s great to see that the team drills are having an effect.”

Liverpool meanwhile started without Mohamed Salah, Roberto Firmino and Sadio Mane at Burnley in midweek. Salah and Firmino came off the bench after the Clarets took a second-half lead, with Liverpool eventually running out 3-1 winners.

Howe is expecting a ‘full-strength’ Reds side, though Mane does remain an injury doubt. “You look at the way they approached the Burnley game – yes they made changes – but they were very professional in the job that they did,” said Howe.

“I think they will look at our game as a very important one in their Premier League season. They are not going to take us lightly. We anticipate facing a full strength Liverpool team.”

Bournemouth are 5.25 to beat Liverpool on Saturday. The Anfield men will go top of the Premier League with a win and are 1.60 to get it, while the draw is 4.20.