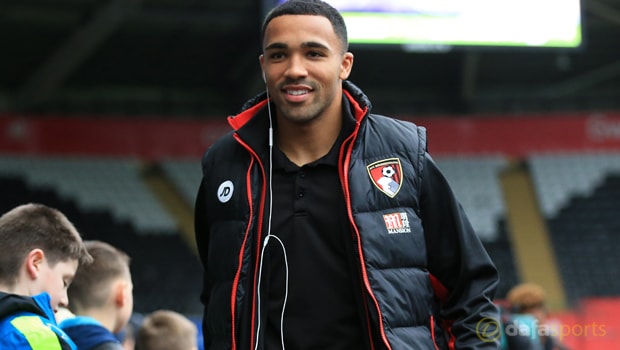 Bournemouth striker Callum Wilson has returned to training with the first team as he continues to recover from a serious knee injury but Eddie Howe insists he won’t be rushed back into action.

The Cherries hitman has endured a terrible time with injuries since the south coast club won promotion to the Premier League for the first time in their history.

Wilson has suffered anterior cruciate ligament injuries in his left and right knees, restricting him to just 33 outings over the last two seasons with the majority of those coming from the bench.

The 25-year-old has been working hard over the summer on his rehabilitation and he is edging towards a return to the first-team fold.

However, Howe is wary of rushing the former Coventry man back too quickly and insists they will take every precaution to ensure he faces no further setbacks, which he feels would have a huge impact psychologically.

Howe told the Daily Echo: “Even when he is training, we will need to give him all the time he needs… he needs several games before he finds his rhythm and confidence and we consider him for selection.

“He looks like he is running a lot more smoothly. He is mechanically very good so I’m really pleased with him and for him. Psychologically, I think he is in a really good place.

“The problem for Callum is that as soon as you are back on a football pitch, you are judged by everybody – me, the supporters, the media – and that can be difficult, especially when you have been out for the period he has.

“With players who have been out a long time, it does take them a while to find peak form… that’s only natural.”

Bournemouth have made a poor start to the season but can be backed at 2.80 to claim just a second win of the campaign when they host Leicester, who are priced at 2.50 to claim all three points on Saturday, while the draw is available at 3.40.