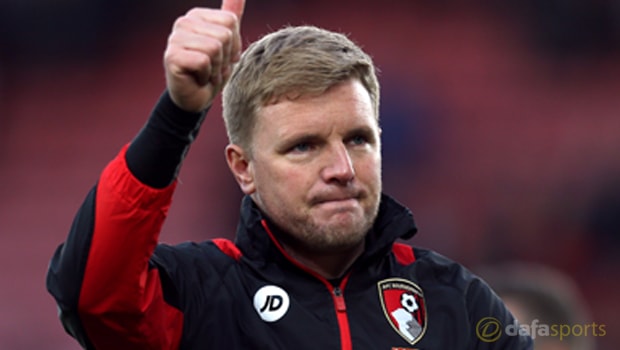 Bournemouth manager Eddie Howe admits that the club’s biggest challenge will be trying to keep the squad together for next season.

The Cherries finished 16th last term in their debut Premier League campaign but Howe has seen an improvement this season as they currently sit 10th heading into the final game.

Bournemouth could still finish as high as eighth if West Brom and Southampton, placed ninth and eighth respectively, fail to pick up any more points from their remaining engagements.

Top-scorer Josh King boasts 16 Premier League goals and is understood to be attracting interest, while defender Adam Smith has been linked with a return to Tottenham.

Howe understands that some of his top performers could be tempted by offers from elsewhere over the summer but he is hopeful of keeping everyone together as they bid to continue their progression.

“For a club of our size, keeping players who are performing so well in the Premier League will be our biggest challenge this summer, probably more so than any other,” Howe told the Daily Echo.

“But we have ambitious plans. We don’t want to lose our best players, we want to bring in more so, hopefully, that will be achieved.

I believe we can keep all our players and we are under no pressure to sell.

“We want to continue to keep growing and we believe we can achieve special things.”

Bournemouth can be backed at 4.50 to end their season with a win when they travel to Leicester who are priced at 1.85 to take all three points, while the draw is available at 3.60.