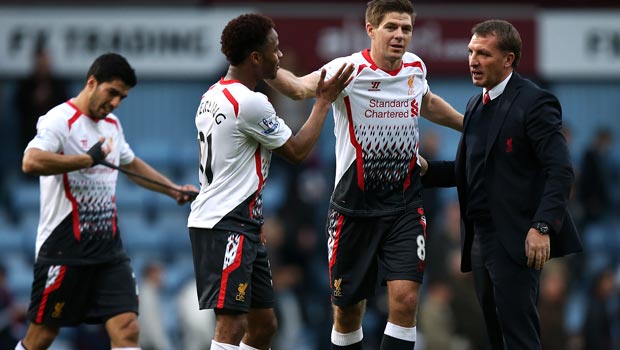 Manager Brendan Rodgers has challenged his Liverpool side to maintain their winning run until the end of the season in order to claim the Premier League title.

Liverpool secured a memorable 3-2 victory over Manchester City on Sunday to put their title hopes firmly in their own hands.

Rodgers’ side moved into a 2-0 lead within half an hour thanks to goals from Raheem Sterling and Martin Skrtel, but City pegged them back to 2-2 before Philippe Coutinho struck 12 minutes from time to secure all three points.

Liverpool now hold a two-point lead over second-placed Chelsea, who travel to Anfield later this month for another crucial title showdown, and have a seven-point cushion over City, who have two games in hand.

Liverpool’s win on Sunday was their 10th straight Premier League win and Rodgers has now challenged his squad to extend that run until the end of the campaign.

“We’ve been put under pressure in a very big game against a big opponent, but you can see from our football that we are coping,” he said.

“My message to the players is to continue. We don’t need to change. We played with no fear. You can see that, whether it is the big opponent like Manchester City or at Norwich City next week.

“Manchester City have still got a couple of games in hand, but to win 10 successive games in the Premier League is a great achievement, and hopefully 10 will become 11 next week.”

Liverpool are now 1.78 to secure the Premier League title while City are 3.30.

The Anfield side can be backed at 1.37 to take all three points when they travel to struggling Norwich next Sunday, the Canaries are 7.33 to come out on top and the draw can be backed at 4.91.