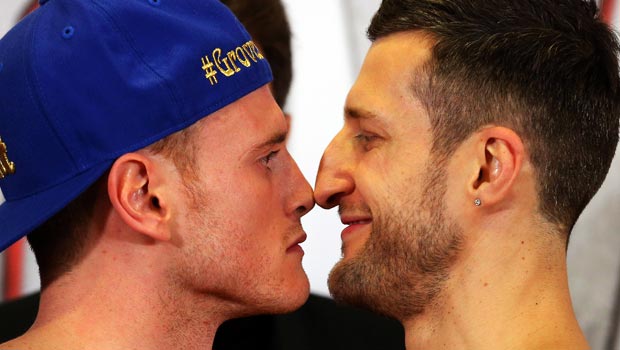 Carl Froch has predicted that he will once again come out on top against British rival George Groves with another “mid to late stoppage” in their eagerly-awaited rematch at Wembley on May 31.

The Nottingham fighter edged to a controversial ninth-round stoppage win in their first bout in Manchester last November as he retained his IBF and WBA super-middleweight titles in the process.

However the IBF ordered a rematch when Groves complained that he was still fit to fight when referee Howard Foster stopped him.

The two fighters are currently preparing for the second showdown while they have already clashed at the Wembley press conference to announce the fight with Froch shoving Groves pitch-side.

However ‘The Cobra’ insists he is not interested in getting involved in any mind games this time.

Looking ahead to the actual fight and Froch is expecting a similar outcome to the first showdown unless Groves “comes out swinging” in which case it will be all over a lot sooner.

He told Sky Sports: “It’s going to be a mid to late stoppage victory for me unless George Groves does anything erratic and comes out swinging – which he is talking about doing, but I don’t think he’s going to.

“But if he does, that suits me brilliantly. He is going to walk straight into a sucker punch and the fight is going to be over early.

“But I don’t want that to happen because there will be 80,000 people there and I want to give them their money’s worth.”

Froch is pleased with his preparations and feels a lot more focused than he was going into his initial meeting against Groves.

He added: “Sometimes your mind is not always there and it’s sort of just getting through the session rather than really digging in and then getting stuck into the session.

“So that’s where I am at now, I’m getting stuck in and thinking about what I am doing and concentrating a lot more in the gym than what I did for the first fight.”