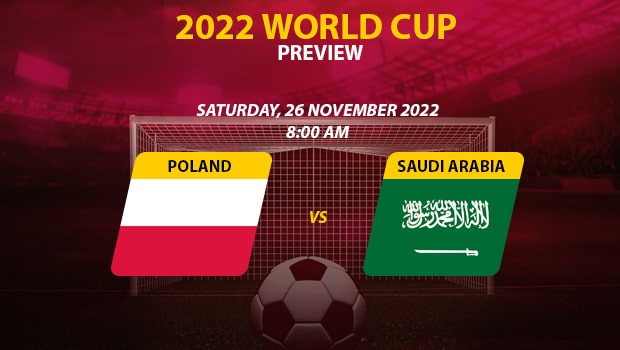 Saudi Arabia looks to keep rolling when they collide with Poland in 2022 FIFA World Cup Group C action on Saturday.

Saudi Arabia stunned Argentina with a come-from-behind 2-1 upset on Tuesday. Argentina took the lead with a Lionel Messi penalty kick but Saudi Arabia played with no fear and pressured Argentina all across the field in a legendary display.

Guillermo Ochoa saved a Robert Lewandowski penalty kick and Poland had to settle with a 0-0 draw against Mexico on Tuesday. Both teams had their chances and it felt like a fair result.

Head-to-Head: These two teams last met in an international friendly on March 28, 2006 and Poland won 2-1.

For Poland, Robert Lewandowski has an 80.5 percent chance to score. He averages 4.5 shots overall per sim, 2.9 shots on goal per and 1.65 goals per sim.

For Saudi Arabia, Haitham Asiri has a 7.8 percent chance to net the ball. He averages 1.4 shots overall per sim, 0.3 shots on goal per and 0.08 goals per sim.

This should be a high-scoring game. Saudi Arabia had a brilliant display against Argentina and they can at least get a goal, while Poland knows this is a must-win game, they saw what Saudi Arabia is capable and they will plan accordingly.

Two-star (out of four) AccuScore hot trend pick on the total in this one. Average score in simulations is Poland 2.52 to Saudi Arabia 0.49.