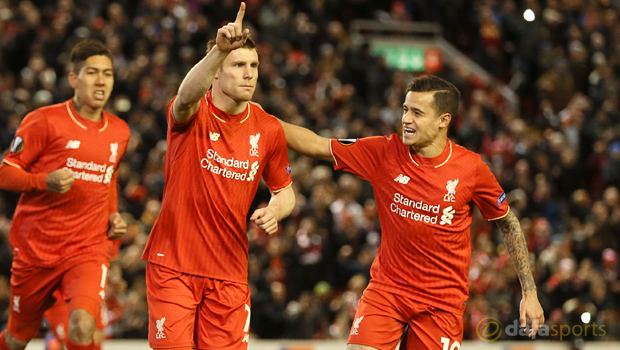 Philippe Coutinho admits Sunday’s League Cup final against Manchester City is a huge moment in Liverpool’s season and the Brazil international has called for a huge team effort to add some silverware to the trophy cabinet.

The Reds have endured a topsy-turvy season so far in which they have replaced Brendan Rodgers as manager with former Borussia Dortmund boss Jurgen Klopp.

Results did take a slight upturn with the German’s arrival but some disappointing results have left the club in eighth place in the Premier League, nine points adrift of the final Champions League position.

The most recent outing in the top flight was a 6-0 demolition of Aston Villa but the follow-up performance in the Europa League against Augsburg did little to inspire, with a 0-0 draw played out.

Liverpool welcome the Bundesliga outfit to Anfield on Thursday for the second-leg of the last-32 clash but attentions are already turning towards the League Cup final.

Coutinho, who recently returned to action after missing most of January due to injury, knows just how important the match against the Citizens is and the attacking midfielder is hoping his side can overcome the former Premier League champions.

“We have a good chance to win the trophy and we have to give everything to take this opportunity,” he said. “Everyone knows it is very important.”

The Brazilian has managed to score five goals in 18 top flight appearances this term and the 23-year-old will be hoping to find the back of the net on Sunday at Wembley.

Liverpool, who won the League Cup in 2012, are the slight outsiders at 2.20 to win the trophy while City, who were knocked out of the FA Cup recently by Chelsea in the fifth round, are 1.61 favourites.