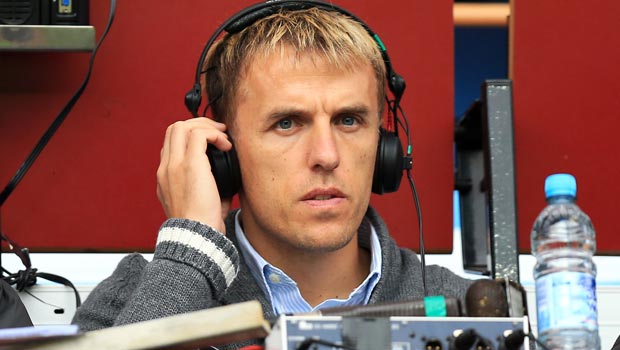 New Old Trafford chief Louis van Gaal has already spent around £150million since taking over in the summer but Neville believes the spree has to continue over the next 12 months.

Neville was a coach at United during David Moyes’s ill-fated reign after being persuaded to retire as a player at Everton in order to return to the club he left back in 2005.

“I think there’s another two transfer windows of similar amounts of money needed – maybe £100m – before they can even think about winning the title.”

United’s expected revival under Dutch coach van Gaal has so far failed to materialise, with the former champions beaten 5-3 at Leicester City on Sunday despite racing into a 2-0 and 3-1 lead at the King Power Stadium.

Former Netherlands boss van Gaal will need time to get his ideas across and with three of the club’s next four Premier League games taking place on home soil, fans will hope United can start to climb the table sooner rather than later.

United are 14.00 to win the Premier League this season.