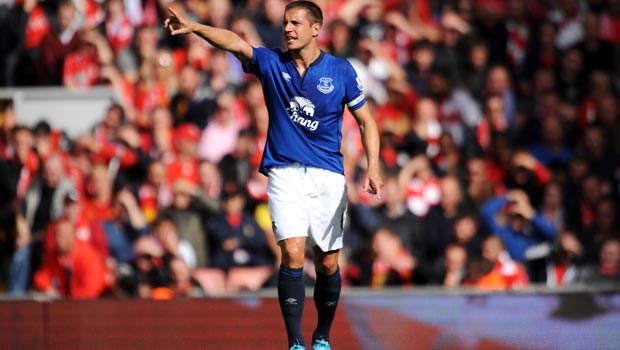 Skipper Phil Jagielka hopes his wonder strike against Liverpool is the start of a turnaround in Everton’s fortunes.

Roberto Martinez’s men were heading for a third straight defeat before the England international stepped up to fire home a valuable equaliser in injury time.

The 32-year-old defender now wants Everton to use their point as a platform as they prepare for a trip to Russia in the Europa League followed by another tough away clash at Manchester United next Sunday.

Jagielka said: “It could be an important goal. We’ve not always got the results we’d have liked so far this season. We’d liked to have come away from here with more than a point. But realistically the way the game went, and being one nil down with 90 minutes to go, we have to settle for that.

“It’s a tough week – Liverpool away, away to Russia and then Manchester United away. That’s a big demand on us so the point gives us more confidence.”

Martinez may rest players for the trip to Russia to keep key men fresh for the Old Trafford clash, but the Spaniard would therefore risk dropping points in a competition they are looking to progress in.

The Champions League place that the Europa League winners get this season could be the Toffees’ quickest route back into that competition after a poor start to their Premier League campaign.

Krasnodar beat Real Sociedad 3-0 at home in qualifying and can be backed at 24.0 to inflict the same scoreline on Everton.