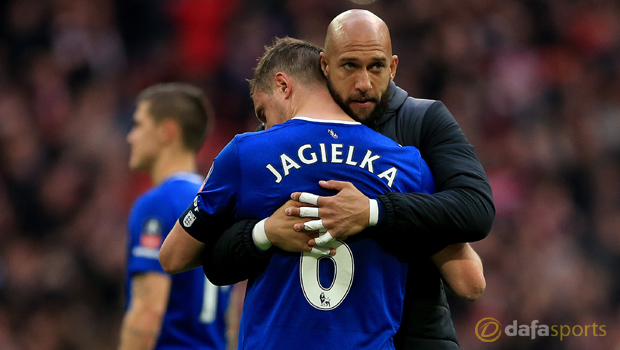 Phil Jagielka says Everton must dust themselves off and bounce back from Saturday’s FA Cup semi-final exit when they host Bournemouth in six days’ time.

Everton went head-to-head against Manchester United at Wembley and looked to be heading into extra-time after Chris Smalling’s own-goal cancelled out Marouane Fellaini’s opener.

However, in the 93rd minute, Anthony Martial latched onto the end of Ander Herrera’s through ball to slot past goalkeeper Joel Robles, sending the Red Devils into the final for the first time since 2007.

It was a cruel end to the match for the Toffees, who had seen Romelu Lukaku’s second-half penalty saved by David de Gea, while Tom Cleverley volleyed wide from close-range.

Roberto Martinez’s future is now in serious doubt after the chance of picking up silverware was ended, with many fans already calling for a change in the dugout.

Everton have not won in their last seven Premier League outings, losing four and drawing three, and the club are languishing down in the bottom half of the table.

A strong end to the campaign is desperately needed for the Spanish boss and Jagielka, who was impressed with the second-half performance against United, has called for the players to respond quickly.

“We knew we had to go out and perform as a team. We came out, started well and put them on the back foot,” he said. “It’s going to be a sad journey back home now but we have to pick ourselves up for next weekend.”

The Toffees welcome Bournemouth to Goodison Park on Saturday and the hosts are the 1.83 favourites to pick up all three points, with a draw priced at 3.75 while the Cherries are on offer at 4.00.