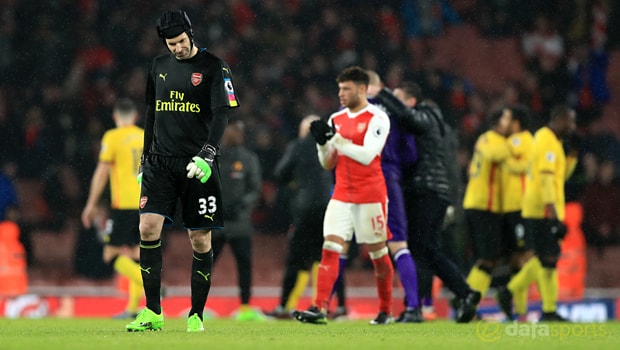 The Gunners were excellent in outclassing Southampton 5-0 in the FA Cup over the weekend and having rested a number of his stars, Arsene Wenger will have expected much of the same against the Hornets.

However, early goals from Younes Kaboul and Troy Deeney gave the visitors the advantage and despite Alex Iwobi getting one back just before the hour, the north Londoners could not find the net again.

It meant Arsenal lost touch with leaders Chelsea, who drew at Liverpool, ahead of the pair’s meeting on Saturday lunchtime.

Cech spent over a decade at Stamford Bridge and admits Tuesday’s defeat has significantly hindered his current side’s chances of chasing down his former club.

Third-places Arsenal are currently 15.00 to win the title and another loss would all but end their chances of topping the standings.

The 34-year-old concedes his team were well below-par against the Hornets and knows they now have their work cut out in the title race.

“This was a huge setback because this was the game we wanted to win,” Cech told Arsenal Player.

“We wanted to put ourselves in a better position going into the weekend.

“I always say that at this level you cannot play 80 minutes, or 85. You have to play 90 minutes with full concentration and everybody on top of their game.”