Per Mertesacker: Gunners were “lucky” 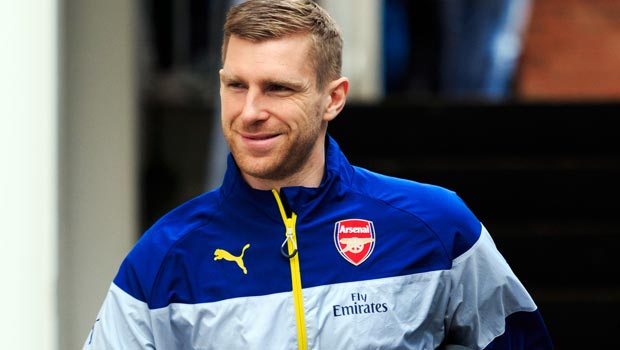 Per Mertesacker has admitted that Arsenal can count themselves “lucky” to have taken all three points off Crystal Palace in Saturday’s Premier League meeting.

Arsene Wenger’s men have capitalised on slip-ups from their rivals to retain third spot after the weekend’s fixtures as Southampton were beaten 2-0 by Liverpool at St Mary’s to slip to fifth, one point and one place behind Manchester United, who lost to Swansea this weekend.

Mertesacker, who has worn the captain’s armband for the most part of this season, believes that Saturday’s result could quite easily have gone against them.

The FA Cup holders came away 2-1 winners from Selhurst Park with goals from Santi Cazorla and Olivier Giroud enough to secure the three points, despite a late strike from Glenn Murray.

The Germany international admitted that there were plenty of opportunities for the Eagles to grab an equaliser, but he was delighted they could hang on.

Mertesacker said: “At the end they tried to put us some pressure and get some strikers on.

“They nearly scored the equaliser so we were a bit lucky at the end.
Overall, we are absolutely delighted with the three points and we move on.

“They have pace up front and good headers of the ball too. They nearly scored in the first half and at the end they had quite a few chances.

Sometimes you lose games, especially at the end. We were lucky today but that was a bit of a warning for us not to switch off too early.”