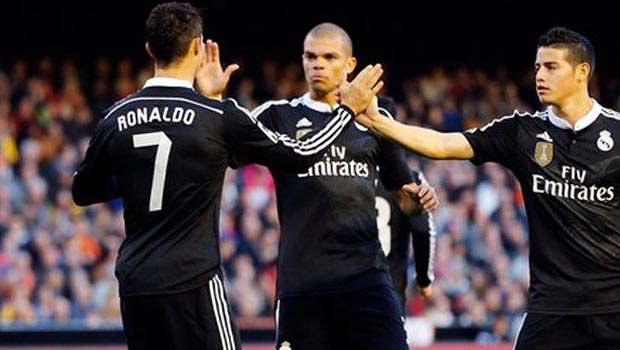 Real Madrid defender Pepe insists that the squad must accept their fantastic run coming to an end and move on following Sunday’s defeat to Valencia.

Los Blancos returned from their winter break full of confidence and with another trophy in their cabinet after winning the Club World Cup.

The Spanish giants had extended their run of successive victories to 22 in all competitions, however they failed to move one step closer to setting a new world record.

Brazilian outfit Coritiba currently boast the record for most successive wins with 24 that they set back in 2010.

Despite Real’s formidable form things didn’t quite go to plan on their return to domestic action as they came unstuck against an impressive Valencia team at the Mestalla.

Real took the lead through a Cristiano Ronaldo penalty in the first half before Antonio Barragan and Nicolas Otamendi both netted in the second period to secure all three points on home soil.

Pepe felt that the European champions deserved more from the fixture but admitted they must not dwell on the defeat as they still have a long way to go this term.

Pepe said: “We didn’t deserve to lose. It’s true that we didn’t get off to a good start in the second half of the game but we had our chances.

“There’s a lot left of the season and we’re still very much in the fight. It would’ve been difficult to win everything until the end, we need to accept our errors and the loss.

“We’re still La Liga leaders and we need to keep working hard. There’s a lot left of La Liga and it’s going to be difficult.”

Real are priced at 2.09 to get back to winning ways when they take on rivals Atletico Madrid, who can be backed at 3.29 to claim the victory, in the Copa del Rey at the Vicente Calderon on Wednesday.