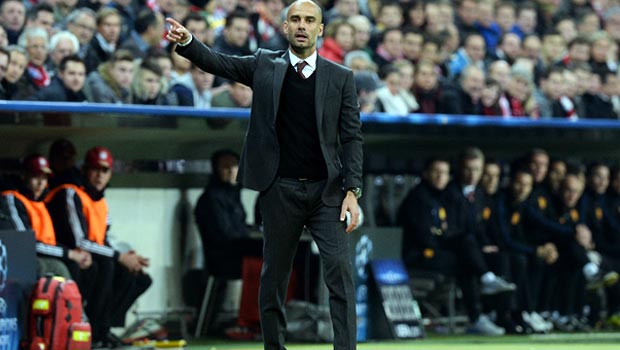 Bayern Munich coach Pep Guardiola said he was “very satisfied” with his 10-man side’s 1-1 draw against Schalke on Tuesday night, despite it leaving them two games without a win in 2015.

The reigning Bundesliga champions were running away with the title again going into the winter break, but they have stuttered on their return with a shock 4-1 mauling at second-placed Wolfsburg last Friday.

And Bayern’s hopes of a quick return to winning ways at the Allianz Arena were dashed when they were held against fourth-placed Schalke.

However, Guardiola claimed he witnessed the stronger side of his squad given that Bayern were reduced to ten men as early as the 17th minute when Jerome Boateng was handed a straight red card for bringing down Sidney Sam inside the penalty area.

Manuel Neuer heroically saved Eric Maxim Choupo-Moting’s subsequent spot-kick and Arjen Robben appeared to have secured the hosts all three points when he headed them in front on 67 minutes.

Schalke’s extra-man advantage finally paid off, though, when Benedikt Howedes equalised just five minutes later to secure a share of the spoils for the visitors.

Afterwards a positive Guardiola said: “I’m not satisfied, I am very, very, very satisfied. Of course we wanted three points, but 70 minutes outnumbered against Schalke is not easy. We had the game very well controlled and had enough chances.

“Our performance was much better than in Wolfsburg. Everything is okay. The red card – no discussion! We were lucky that they have missed the penalty.”

Despite dropping more points, Bayern still sit eight points clear of Wolfsburg at the top of the Bundesliga after they were also held to a 1-1 draw at Eintracht Frankfurt.