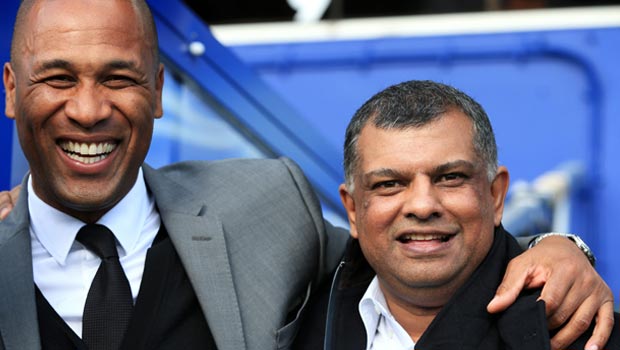 QPR have confirmed Les Ferdinand will become director of football following on from boss Harry Redknapp’s resignation, while Chris Ramsey and Kevin Bond will temporarily take charge of first-team matters.

Redknapp made the surprising decision to walk out of his job at Loftus Road on Tuesday after just over two years at the helm and cited his inability to do the job because of imminent knee surgery as the reason behind his decision.

Ferdinand, who spent eight years with the R’s as a player, was initially placed in caretaker charge along with coach Ramsey while Joe Jordan and Glenn Hoddle both left with Redknapp.

QPR owner Tony Fernandes has now confirmed that Ferdinand will take on a new role within the club, as work starts to find a permanent managerial successor for Redknapp.

Tim Sherwood is the early favourite and that would see him reunited with both Ferdinand and Ramsey after they worked together at Tottenham when Sherwood was in charge at White Hart Lane last season.

In the meantime Fernandes has revealed that Ferdinand’s job will be to help bring more players through from the youth team and into the senior squad as opposed to throwing money at expensive signings which is the route they have gone down in the past.

He said: “We’ve made a number of mistakes in the transfer market over the last few years and it’s something we want to change. We don’t want to be a buying club – we want to nurture young talent and build a young, ambitious team.

“Premier League survival is our priority in the short term, but in the medium and long term we want to make sure everything is in place, from the academy upwards, to create a culture and philosophy within the club that QPR fans can be proud of.”

QPR are 1.70 to be relegated this season and can be backed at 3.50 to finish bottom of the Premier League.