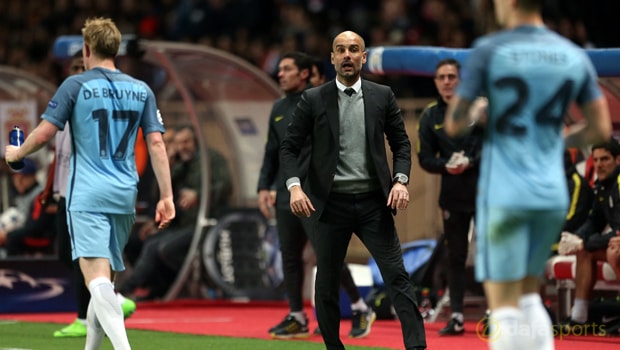 Pep Guardiola has refused to blame his own tactics following Manchester City’s exit from the Champions League.

The Citizens went into the second-leg of their Last 16 tie with Monaco at the Stade Louis II holding a 5-3 advantage from the reverse fixture and Guardiola was keen to adopt a similar attacking approach in the Principality.

The Spaniard left midfielder Yaya Toure on the bench in favour of attack-minded players such as Leroy Sane, Raheem Sterling, David Silva and Kevin de Bruyne, but the gamble did not pay off, as Monaco won 3-1 on the night to progress through on the away goals rule.

After the match, Guardiola stood by his tactical approach, preferring to blame his side’s lacklustre display in the first-half, City trailed 2-0 at the break, for the defeat.

“All managers make mistakes but I don’t think it was down to a tactical mistake,” the Spaniard said.

“It’s simple. The difference was between the first and the second half.

In the second half we tried to win the game, we tried to play. I did it all my career in that way.”

Guardiola arrived at the Etihad Stadium with the objective of guiding City to Champions League glory and he insists he will continue with that goal next season.

He added: “I came here to win the Champions League? I tried, I tried – and I will try again.”

City will now turn their attention back to domestic matters, as they play host to top four rivals Liverpool in the Premier League on Sunday.