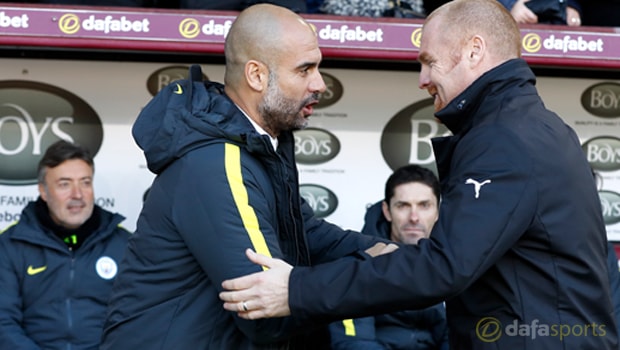 Pep Guardiola felt that character and determination were as much responsible for Manchester City’s win at Burnley as talent.

The Citizens recovered from the loss of an early goal to Dean Marney to take three vital points with opportunistic goals from Sergio Aguero in each half.

The Argentine striker looked sharp throughout and netted both his goals from close range.

Guardiola felt he needed “fresh legs” on the back of Man City’s midweek Champions League draw in Germany, with City having lost one and drawn two of their past three games following outings in Europe.

He made five changes to his team, with Kevin De Bruyne on the bench and John Stones not part of the matchday squad.

Afterwards, the Spaniard hailed the collective and said his had shown a strong resolution to get the right result from a tough fixture.

The former Barcelona and Bayern Munich coach also admitted that such games are still new to him.

“I have to learn how to control the second balls because in Spain and Germany teams do not play long or with these flat balls and crosses with the same intensity, or so frequently as Burnley did,” said Guardiola.

“All of our players showed huge character and we are so happy because this week was very important for us.”

Aguero’s ability to snap up the merest hint of a chance in front of goal proved the difference and his manager paid tribute to his performance after he hit double figures for the sixth Premier League season running.

“From the beginning he was ready, his body language was very good.” Manchester City are now 3.00 to win the Premier League title.