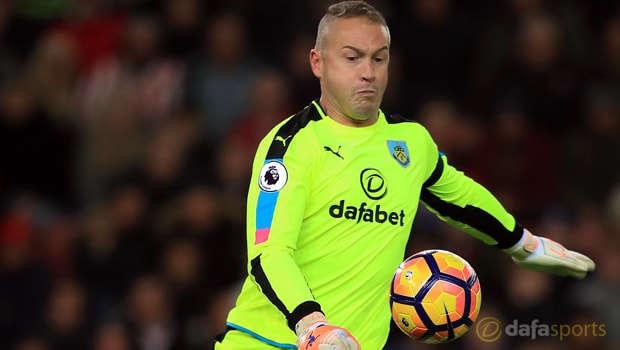 Veteran Paul Robinson has been praised by Burnley boss Sean Dyche for the positive impact he is having on the club’s goalkeepers.

Robinson was signed on a short-term deal by Dyche back in January and the Clarets boss elected to keep the 37-year-old on his books after the club secured a return to the Premier League.

Robinson earned praise from his manager after that game and Dyche has now revealed the all-round impact the ex-England stopper is having on the Turf Moor goalkeepers.

“I spoke to him in private and you could see he’d got the bug back, you could see it in his eyes, the way he was talking about it.

He came in last year and did great for us and has done ever since,” said Dyche. “It’s partly evolved into what he can rub off onto the other keepers.

His standards are very high from the career he’s had. He knows some of the not-so-good things that don’t work so he can share that when he needs to.”

Heaton remains a doubt for this weekend’s clash with Stoke at the bet365 Stadium and Dyche says he will have no qualms about calling on Robinson once more.

Risking further injury to Heaton is not on the agenda. “Tom – he’s touch and go. It’s just the nature of it,” he added. “It’s down to the end of the injury.

Then it’s a judgement call about whether you want to risk that or not. Robbo certainly delivered a good performance.

“I’m not going to make a drastic decision on it or one where I think it’s going to put him at risk.”