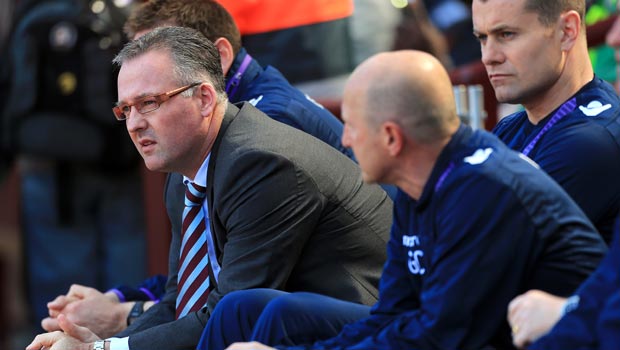 Aston Villa boss Paul Lambert is adamant that he remains in charge of the club’s transfer dealings and he will not be offloading his key players in the summer.

The Scot’s own future remains up in the air at the moment as the current Villa owner Randy Lerner has put the club up for sale with a £200million asking price in the hope to offload as soon as possible following eight years at the helm.

Any prospective buyer could look to replace Lambert in the managerial hot-seat given his underwhelming two seasons at the club in which Villa have spent the majority of that time fighting to avoid relegation.

There is also the matter of several saleable assets within the squad as the vultures are believed to be circling for the likes of Christian Benteke, Brad Guzan, Fabian Delph and Ashley Westwood.

However, Lambert insists that while he remains at the club as manager, he will decide who stays and who leaves ahead of next season until he is told otherwise.

“I can say they’re not going anywhere. I’ll still have the final say on who came and who went,” he told the Daily Star.

“I wouldn’t imagine anyone will leave without my permission.”

Despite his difficult tenure at Villa Park, Lambert insists he is happy to be manager and has “no regrets” about his decision to leave Norwich for Villa in summer 2012.

“Any regrets? No, not at all. If it all ended tomorrow I would take away an unbelievable experience because it’s a brilliant club,” he added.

“The pressure on it is big, no two ways about it. But there’s always something good that will come out of something like this.

“So I don’t have any regrets.”