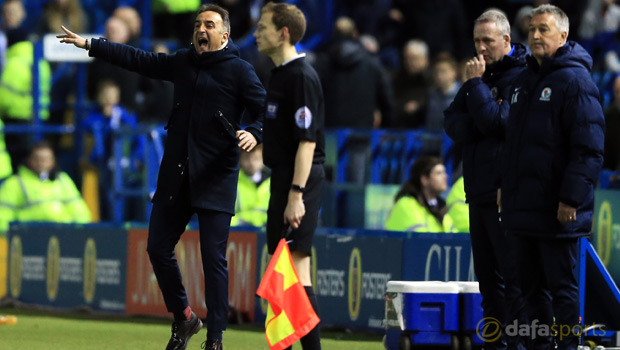 Boss Paul Lambert has suggested he could leave Blackburn in the summer if he does not feel he is receiving the support required from the club’s owners.

The Scot arrived at Ewood Park in November but after a bright start he has seen his side’s form tail off and on Tuesday they suffered their fourth defeat in five matches when they went down 2-1 at promotion-chasing Sheffield Wednesday.

Lambert’s initial impact had led to suggestions Rovers could themselves be possible play-off candidates but, despite having their transfer embargo lifted in December, they only brought in Elliot Ward on a free transfer during the January window.

In contrast, owners Venky’s sold star striker Jordan Rhodes to Middlesbrough and although the sale boosted the club’s bank balance, it is unclear if that money will be available to Lambert in the summer.

Despite having over two years left on his contract, the 46-year-old old appears unhappy at his current situation and is non-committal about his future.

With Blackburn’s Championship status looking to be safe, the boss has already started to look at potential targets but is unwilling to make any promises about whether he will remain at the club until he has spoken to the owners.

“We’ll have to wait and see what is going to happen,” Lambert told the Lancashire Telegraph. “We need to wait and have talks with the owners.

“The summer was always going to be massive. Nobody can take anything away from the owners and the money they have put in the past but I’m not here for the past. The club has to move forward.”

Saturday sees Blackburn take on Wolverhampton Wanderers in a game they are 2.75 to win, with the draw 3.10 while Kenny Jackett’s men are slight 2.63 favourites.