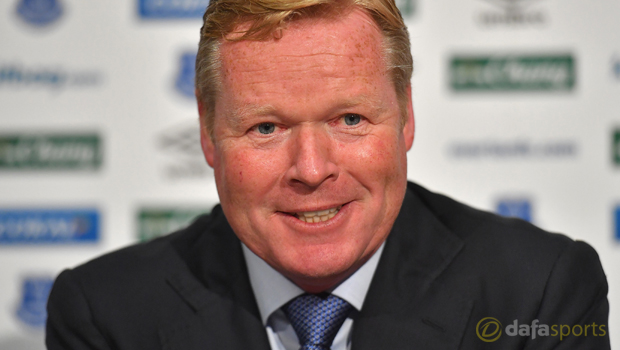 Patrick Kluivert believes his fellow countryman Ronald Koeman will bring success to Everton after making the switch from Southampton.

Koeman enjoyed two successful Premier League seasons with Southampton before agreeing on a switch to Merseyside to replace Roberto Martinez. Kluivert played under Koeman at PSV Eindhoven, where they enjoyed Eredivisie title success together.

They also worked together with the Dutch national team and at Barcelona, when Koeman was assistant boss. Former striker turned pundit, Kluivert has revealed some of the traits that he believes make the 53-year-old stand out as a manager.

“If you know your players well, then you can influence them. That is the most important thing. He is a very friendly person.

He knows what he wants and knows how, in his head, to achieve the things he wants,” said Kluivert.

“Ronald is a great coach and great trainer.” Kluivert feels that swapping St Mary’s for Goodison Park was a logical move for Koeman.

His ability to get to know his players quickly and transmit his ideas across in training will be hugely beneficial for the Toffees in the coming months, says Kluivert.

“He [Koeman] has made a very good move from Southampton to Everton,” he added.

“He did a great job at Southampton. But Everton is a great club to coach.

“For a coach, it is very important how you transmit [ideas] to your players. Ronald is one of the best at that.

His strengths are that he knows his players really well.” Everton are on offer at 17.00 to achieve a top-four finish in the Premier League under Koeman next season.