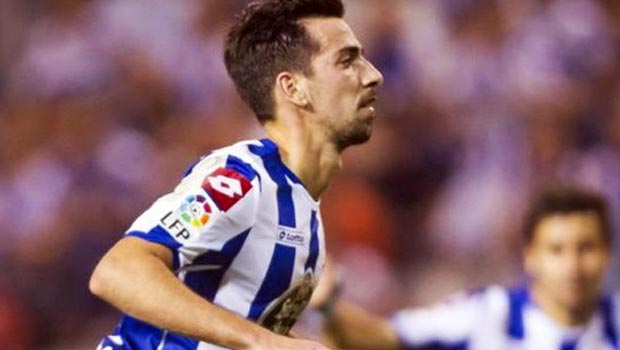 Deportivo La Coruna winger Isaac Cuenca feels the current malaise at Real Madrid has opened the door for a shock result this weekend.

Real appeared set to sweep all before them with their scintillating displays this term but a 4-0 thrashing by city rivals Atletico has seen their lead at the top of the La Liga standings cut to just one point.

Barcelona are hot on their heels while Diego Simeone’s men are now just four points adrift and last season’s three-way title race is being replicated.

All is not rosy at the Bernabeu with doubts over the form of Gareth Bale, as the world’s most expensive player has been on the end of some booing by the frustrated home fans at his perceived selfishness on the pitch.

Cristiano Ronaldo is the undoubted hero at Real and the sight of the Portugal international waving his arms in frustration at the Welshman’s failure to pass the ball to him when open has clearly irked the home faithful.

Carlo Ancelotti will be desperate for his men to get back on track on Saturday against a team that Real beat 8-2 earlier in the season.

But Cuenca senses that the pressure put on the home players by the fans could help his side’s chances of upsetting the odds.

“I don’t know if there’s a good moment to go to the Bernabeu, but the atmosphere is tense, the fans are anxious and if they don’t get an early goal they could be jeered,” he said.

“It’s best to play against them now, because when they are full of confidence they come at you with everything. If they don’t do that, there could be nerves.”

Despite Cuenca’s upbeat mood, Deportivo are priced at 25.77 to beat Real who can be backed at 1.08 to do the double over Victor Fernandez’s side.